Angular vs. React: How to Choose the Best One for Your Web App

You've heard of Angular and React, but what is the difference between them? This article will help you make the best choice for your web app. 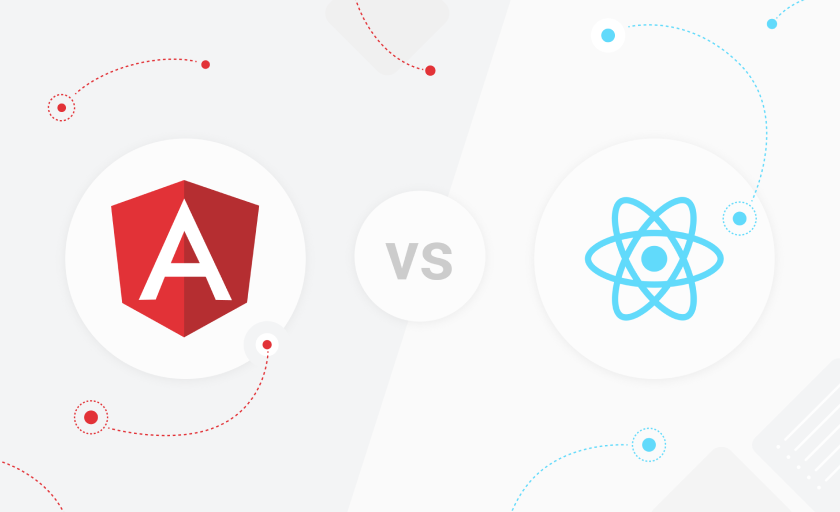 Angular vs. React How to Choose the Best One for Your Web App

Web frameworks are an essential component of today’s online world, as they essentially have to serve as the backbone for any website or app. Web frameworks are typically used for creating websites or applications and they typically use some form of JavaScript. Performing a comparison of React vs Angular is a difficult task, there are many different factors to consider.

But what do these frameworks share in common? What are the main factors to consider when comparing React vs Angular? When should you use one instead of another? This article will give you a detailed comparison of these frameworks, which will help you decide on what is the right Javascript framework for your next project. At the end of this article, you should have a better idea of how to choose between React and Angular.

The code behind an Angular application is written in a language called TypeScript. It also uses HTML and CSS to style the user interface (UI) and control its layout.

React is a library that allows us to create reusable UI components. ReactJS is one of the most popular JavaScript libraries with a strong foundation and large community behind it. React JS uses a virtual DOM approach which is considered more efficient than the traditional full page refresh.

The main objective of React is to be fast, scalable, and simple. It works only on user interfaces in applications. This correspondingly helps the programmer to generate reusable UI components.

Pros and Cons of Angular

There are many pros and cons of Angular to consider before deciding to select it to be your framework of choice. We’ll discuss the benefits of using Angular for your web app and the potential limitations.

Angular is a complete framework, which includes the view layer, React is not. If you use React you may need to use additional libraries for certain features.

Angular uses a two-way data binding approach. This means that when you update the view, the model gets updated as well, and vice versa.

A disadvantage of using a ready-made Angular is that it can hide the underlying complexity of building an app. If later on, you want to understand how something works under the hood, it can be difficult to dig down to a lower level to fully grasp why certain behaviors occur.

Angular boasts a wide array of features that are not included in React. This may sound like an advantage at first, but the additional features add a level of complexity. Angular is much more verbose than React. Angular also has an opinionated style and structure, React does not.

Although Angular supports unit testing, one of the common complaints about Angular is that it can be hard to write tests for, especially because of the framework's opaqueness.

Angular web apps are written in plain JavaScript and TypeScript. Your development team may need to upskill and learn TypeScript as it is a relatively new language. Compare this to React, where applications are written in plain JavaScript. Answering the question is Angular better than React, may depend on the current skill set of your development team.

Pros and Cons of React

Just like its counterpart, React offers both pros and cons that have to be considered before a decision can be made. We’ll highlight the advantages and disadvantages of using React as the framework for your projects and software solutions.

You want to know an answer to the question, is React better than Angular? These advantages might be able to help provide an answer to that question. One of the biggest advantages of React is that it allows us to create reusable UI components. A key advantage of this approach is that if we have an application with different views, we can have each view built as a composition of components. This offers an additional advantage in that these components can also be shared across multiple projects.

Another advantage of using React is that unlike Angular, which uses simple watches to detect changes in models and update the view, React’s virtual DOM uses one-way data flow which makes it easier to understand how the state changes affect the rest of the app.

React has an additional advantage in that it is much easier to learn than Angular, so developers can be productive quickly. The learning curve is further reduced by the availability of a wide variety of React-based open source projects that can be used as templates for developers to use as the starting point for their own projects.

While React is a useful and flexible tool, there are several disadvantages that have to be considered when thinking of React versus Angular.

React is a library, not a framework. This can be a better or worse option depending on your scenario, as you may spend a lot of time deciding between, and setting up suitable libraries before you can actually get started on the development of your project.

One of the most obvious cons is that React doesn't provide an out-of-the-box solution for routing. This means that if you want to use routing in your application, you need to pick a router library and include it in your project yourself. One workaround is using react-router which is one of the most popular routing libraries. It's not the only option, but it is by far the most popular one.

Compare this to Angular which comes with a built-in router called ngRoute which works very well. This networking solution is also relatively easy to set up.

React uses JSX. JSX is an XML/HTML-like syntax used by React. It allows the HTML syntax to work alongside JavaScript and React code. If you want to use React, you must understand how to use JSX too. This could be an added hurdle to overcome when you have the options of Angular or React to pick.

The Main Differences Between Angular and React

Angular and React are the two most popular options when discussing frontend frameworks and libraries. They are both open-source and have a large community of developers. The is not just one difference between React and Angular the list of what sets these two options apart is quite extensive. Here are the main differences between React and Angular:

This concludes our comparison of Angular vs React, now you’re probably wondering which one to choose!

React or Angular: What to Choose for Web Application Development

Comparing Angular vs React is difficult as they are both excellent options. Angular is a robust platform that can be used to build full-stack applications, while React is a library that makes it easy to create interactive UIs.

Both have similar learning curves, however, Angular has a slightly steeper learning curve than React because of its TypeScript syntax and stricter structure. However, if you’re concerned about finding developers with experience in each framework, you should know that according to theStack Overflow Developer Survey for the most popular web frameworks, React is clearly the more popular choice. This comparison of Angular vs React popularity might help you decide between the two if you are building a new team, or plan on hiring new developers for your project.

If you're looking for developer productivity and scalability (and especially if you want to build a progressive web app), Angular is an excellent choice. However, if you need a lightweight solution that's flexible enough to tackle any type of project, then React is your best bet. This comparison should help you choose React or Angular for your specific use case.

Here at Integrio System, we use advanced technologies to deliver excellent custom web application development services. We have been using the latest web development technologies to build highly secure, scalable, and efficient applications for the last 20 years. We have implemented more than a hundred web solutions for bootstrapped startups and large enterprises. Even with this experience, the comparison of Angular versus React is still difficult. One can not say one option is simply “better” than the other. They both offer unique advantages over the other. When deciding which to choose for a certain project, our senior technical experts will assess the budget, needs, and scalability of certain solutions to help drive their decision as to whether they should choose Angular or React.

Either React or Angular could work as excellent solutions for your specific project. They each have their own unique features, strengths, and weaknesses. If you have never used either before, we think it’s definitely worth your time to check them both out and develop some proofs-of-concept with each. As with most things, it comes down to what is a better fit for your unique situation. Now that you have concluded reading this article, you should have a better idea of how to choose between Angular and React. If you’d like to consult proven experts in this field, consider contacting Integrio Systems today, our team would be happy to help.

Angular vs. React: How to Choose the Best One for Your Web AppWhat is Angular?What is React?Pros and cons of AngularPros and cons of ReactThe main differences between Angular and ReactReact or Angular: What to Choose for Web Application DevelopmentOur experienceFinal thoughts